MAFS 30th year Mini Fundraiser took place on 5/14/2022 celebrating 30th anniversary of the organization and commemorating Asian American Heritage month. The venue of the event was the new MAFS office location on Devon Avenue, and it was a grand success! The evening started off with the Ganesh Vandana an innovatory piece performed by Srividya and Varsha from Malhar dance academy. American and Indian anthems were sung by Gauri Yadav and Dr. Sonal Patel respectively. This was followed by the traditional Diya (Lamp lighting) spearheaded by Founder and Executive Director Dr. Santosh Kumar with all the Dignitaries.

The prominent speakers among the dignitaries were Illinois Senator of 28th district Laura Murphy who commended MAFS and the terrific work they are doing for the Asian American community. Illinois Senator of 8th district Ram Villivalam said MAFS is a positive influence in his district and he is ecstatic with the opening of the new location to help more seniors with services. US Representative of Illinois 8th Congressional district Mr. Raja Krishnamoorthi made a fleeting stop despite his hectic schedule and said he is an ardent supporter of Mrs. Kumar and MAFS. He highlighted the contribution of MAFS to the South Asian community commending the fact that it serves over 60000 meals to seniors and conducts 150,000 home visits annually. He added that American Indians are the fastest growing ethnic community and are instrumental in making the US the greatest country in the world. Ms. Denyse Stoneback, representative from the 18th district applauded MAFS and said she is delighted to keep supporting MAFS. Glenda Corbett, the newly appointed Director of Community Engagement and Equity at the Illinois Department of Aging said that her appointment sets the tone for more help to the diverse population. Ms. Selma D’ Souza, Chief of Staff IDOA was in presence to support the event. Mayor of Hanover Park Rodney Craig said that his association with MAFS and Dr. Santosh Kumar is longstanding and MAFS is providing services in all his suburbs. Also in attendance were the current Indian Consul General’s wife Mrs. Surabhi Kumar and former Consul General and Ambassador Mr. Arun Kumar who emphasized the contributions of Indian Americans to the US. Phillip Lanier of Age Options explained that as an area agency that funnels federal funding, they can only partially fund the programs and the remaining cost should be covered with additional funding by patrons and donors. Lucas Dvorscak who is the Grant and data reporting specialist at Age Options was also present and enjoying the festivities. The last Speaker was Mr. Harish Doshi, the newly appointed administrator of the International University of Vedic Wellness and Santoshland. He gave a fantastic speech in which he explained about Ayurveda and all the healing aspects and their remedial services.

Mrs. Kumar gave all the guests an incredibly special souvenir- India Calling book which is a compilation of 111 foreign visits made by honorable Indian Prime Minister Mr. Narendra Modi to forge world unity.

The Seniors of Naperville, Schaumburg, Chicago, Vernon Hills, and Orland Park centers performed Indian Bollywood and cultural dances that were mind-blowing. Most of the dances were to popular Bollywood songs- a combination of old classics and latest releases. The dignitaries and the audience were simply enthralled at the enthusiasm and finesse exhibited by the seniors.

Mrs. Santosh Kumar, Founder of MAFS and the heart and soul of the organization gave a phenomenal speech outlining the 30-year-old journey of MAFS. It was an overwhelming moment for her, but she patiently explained all the difficulties and hardships that she overcame to build an organization whose sole purpose is helping immigrant seniors and families in need. She spoke highly of the Board members who provide solid backing to the organization and the hardworking staff who are truly the pillars.

The program ended with singing performance by young and talented artists Rajat Sahani and Shivani Shah who had come all the way from India to regale the audience. They were accompanied by Joy Christian- a talented singer from Chicago. The audience really enjoyed their vibrant and lively performance.

The delicious dinner provided at the event was sumptuous and on the same nutrition guidelines followed by the MAFS meal programs.

After dinner, the staff of MAFS enjoyed and relaxed while dancing to some lilting tunes. Staff were especially delighted to hear Khaike Paan Benaraswala khul jaye bandh akal ka Tala and just took off to the song.

Finally, Dr. Mrs. Santosh Kumar gave a vote of thanks to all the Board members, staff of various departments, donors, volunteers, Senior performers, singers, sound engineers and custodians.

Rajendra Singh, Niles cook / Driver surprised Mrs. Kumar, Prashant Kumar, and Sagar Kumar by presenting them with a mind-blowing painting of our new location in Devon. Mrs. Kumar praised him by saying that he is an absolute all-rounder and an asset to the organization. She thanked him for his dedicated support.

The fundraiser was spectacular, and the support received by everyone was incredible. MAFS is thankful to everyone and is looking forward to the continuous support from funders and the community members to launch and implement more programs/services for the seniors in future. 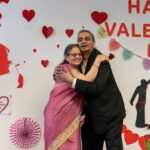 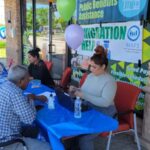