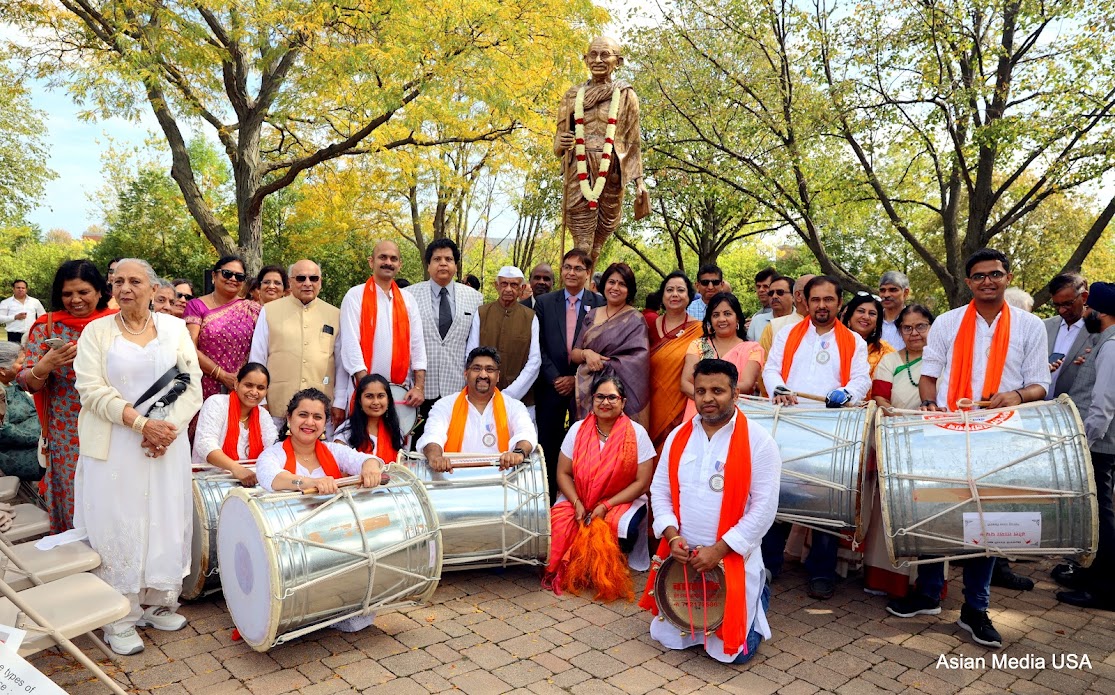 Indian Consulate of India, Chicago collaborated with The Gandhi Memorial Foundation, Chicago on October 2nd, 2021, at Heritage Park in Skokie IL, to celebrate this auspicious day.

The event commenced with Honorable Consul General Amit Kumar who addressed the guests. He highlighted India’s freedom struggle and the significant role played by Mahatma Gandhi, who walked the path and preached non-violence throughout his life. He highlighted “Azadi Ka Amrit Mahotsav”, which is an initiative of the Government of India to celebrate and commemorate 75 years of India’s progress and the glorious history of its people, culture, and achievements. Consul General praised the Gandhi Memorial Foundation of Chicago Team of Board Members, Metropolitan Asian Family Services (MAFS) staff, and Consul General staff members led by Mr. Ranjeet Singh Ji, for doing an excellent job in organizing this important event.

His inspiring speech was followed by the Mayor of Skokie, George Van Dusen, during his speech he said that the Township of Skokie is fortunate to have the life-size statue of Mahatma Gandhi in Heritage Park since October 2, 2004, He praised and appreciated the Indian American Community for their support and friendship.

Following that, seniors from Metropolitan Asian Family Services aptly sang the famous Bhajan, “Raghupati Raghava Rajaram”, a song which was extensively used by Mahatma Gandhi to project a secular and composite vision of Indian society. 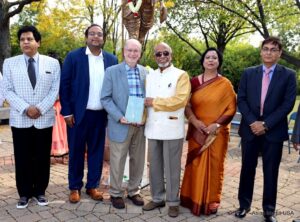 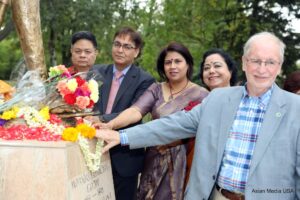 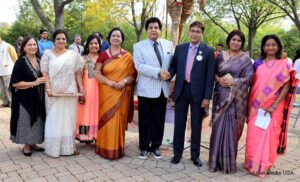 Next, Dr. Santosh Kumar – President of Gandhi Memorial Foundation of Chicago addressed the guest in her motivating speech. She sincerely thanked the Honorable Consul General and his wife for taking their precious time to collaborate and to join this memorable event. She mentioned that Mahatma Gandhi inspired her as a teenager to choose Law as her career rather than being a physician for what she studied for. Gandhiji’s freedom struggle and the injustice done to the motherland emboldened her to become an attorney to fight for the oppressed. In her speech, she felt the valid reason to talk in Hindi as Hindi is the official language of India. In her assertive speech, she emphasized the great saying of Mahatma, “No Religion is higher than the Truth and Righteousness!” She said that Mahatma taught Dedication, Sacrifice, and to Stand against Oppression and Wrongful forces, which induced chaos amongst people. A nation should join as one and not get influenced by these wrongful forces. In her speech she urged everybody to follow that and if they were ready to do that! She thanked Dr. Chadrakant Modi and his wife Dina Modi who donated the 12-foot statue of Mahatma Gandhi, to the Village of Skokie and the Gandhi Memorial Foundation of Chicago. She pointed out that Gandhiji’s practice of Ahimsa (non-violence) which was an extension of his respect for other religions creating a sense of fraternity. She further added that Mahatma Gandhi vehemently opposed injustice and authoritarian rule, which is the primary manifestation of the Gandhian legacy today. Dr. Santosh Kumar was very enthusiastic about the Global Gandhi Youth initiative.

State Senator Ram Villavallam, of the 8th District of Illinois, gave certificates and books to the Global Gandhi Youth USA Chapter Members and congratulated them on their thought-provoking speeches which emphasized the need for tolerance, harmony, and inclusion.

Rudra Garjana Chicago Dhol Tasha Team led by Mandar Pitre did a fabulous job that elevated the spirit of the day. The percussion ensemble performed at the conclusion of the event which reminded all of the traditional drums being played during Ganeshotsav in India. The Consul General praised the percussion ensemble for their vibrant performance.

The event was well moderated by Shree Gurusamy, Secretary of Gandhi Memorial Foundation of Chicago. She thanked the Metropolitan Asian Family Services Seniors and staff for all the floral and food arrangements at the event. Gandhi Memorial Foundation of Chicago Board of Directors, Dipti Shah – Treasurer, Awilda Gonzalez – Director-At-Large, Bharti Desai – Director-At-Large and Suresh Bodiwala – Trustee were recognized for all their voluntary services during the past year.

Dr. Vijay Prabhakar, Vice-President of Gandhi Memorial Foundation of Chicago, gave the closing remarks. Dr. Prabhakar presented a token of appreciation to the Consul General of India at Chicago, Mr. Amit Kumar, for his inclusive leadership and dynamic accomplishments, including initiating the First Gandhi King Legacy Roundtable Summit on February 24, 2021, held at the UMAS/MAFS center in Naperville. Also, his efforts led to the defeat of the Anti-India Resolution in the City of Chicago Council on March 24, 2021. Dr. Vijay G Prabhakar also presented a token of appreciation to Rudra Garjana Chicago Dhol Tasha. In his closing remarks, he praised the members of the Global Gandhi Youth USA Chapter.

Then, Metropolitan Asian Family Services (MAFS) as usual prepared delicious Boxed lunches along with hot tea and water for all the guests. For more regarding Gandhi Memorial Foundation of Chicago please visit: https://gandhimemorial.org/

JAI HIND AND LONG LIVE THE LEGACY OF GANDHI….

Happy to Announce the Launch of International University of Vedic Wellness 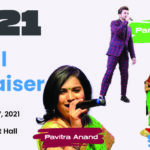