On the morning of August 15th, 2019, Adult Day Care Participant Seniors and Staff from our ADS locations, namely, Schaumburg, Niles, Vernon Hills, Naperville, and Orland Park prepared to go to the Indian Consulate. The seniors kept chanting “Vande Mataram” meaning “Mother, I bow to thee”! Everyone gathered outside the consulate holding the Indian Flag and chanting “Bharat Mata ke Jai” meaning, Hail Mother India. Patriotism was in the air. The Seniors celebrated this day with fervent enthusiasm.

At around 10:00 am everyone assembled inside the Indian Consulate. Consulate General Sudhakar Dalela and staff welcomed everyone. They showcased good entertainment, like dances, singing, and plays, commemorating patriotism. The seniors took many pictures to keep in their memory albums. A scrumptious lunch was served. After which, the seniors left the consulate and enjoyed the weather outside, and prepare to leave to their locations. 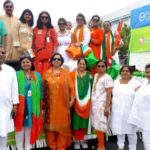 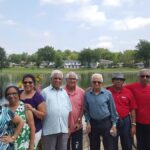